Over the last couple of weeks in our Discovering Insect Species course we have been processing samples from our Klamath Marsh trip, and worked with the DNA of the beetles.  Here’s a bit of what we have done.

We start out with a bit of a beetle in a tube.  This is what it looks like:

A bit of a Bembidion in a tube. This doesn’t happen to be a Trepanedoris, but it would look just about the same if it were.

We then went through all of the steps required to dissolve the soft tissue in that sample, and from the soup that results extract the DNA by itself into a clean tube.  Here are pictures of a couple of those steps:

The students extracted DNA from a total of 36 specimens, most of which they had collected on our Klamath Marsh field trip.

Amplifying a gene we want to study

Once all of the DNA in the beetle was extracted, we then wanted to pick a few genes, and make many copies of those genes so that they could be sequenced.  The first gene we picked was 28S.

Everyone combined various chemicals in some small tubes.  These chemicals included nucleotides and an enzyme, Taq polymerase, which copies DNA.  We also added short stretches of DNA called primers that match part of the sequences for the 28S gene in the beetles, and that will providing a starting point for the reaction.  The end result will be that the enzyme will produce many copies of the beetle’s DNA between the two primer regions on the chromosomes.  This reaction is called the Polymerase Chain Reaction, or PCR, and is a standard way of making many copies of (“amplifying”) DNA.

Here we are getting small tubes set up for PCR:

The tubes are then put onto a machine called a thermal cycler, which once closed and started will go through various cycles of changing temperatures:

In the end you get, for each sample, a little tube that contains zillions of copies of the piece of the 28S gene between the primers:

At least that’s what we would hope would happen.  To confirm that the DNA piece was amplified for each sample, John then mixed a small amount of the liquid from each PCR tube with a dye that will attach to DNA and fluoresce under UV light, and ran the combination on a gel, thus allowing us to see whether DNA was amplified: 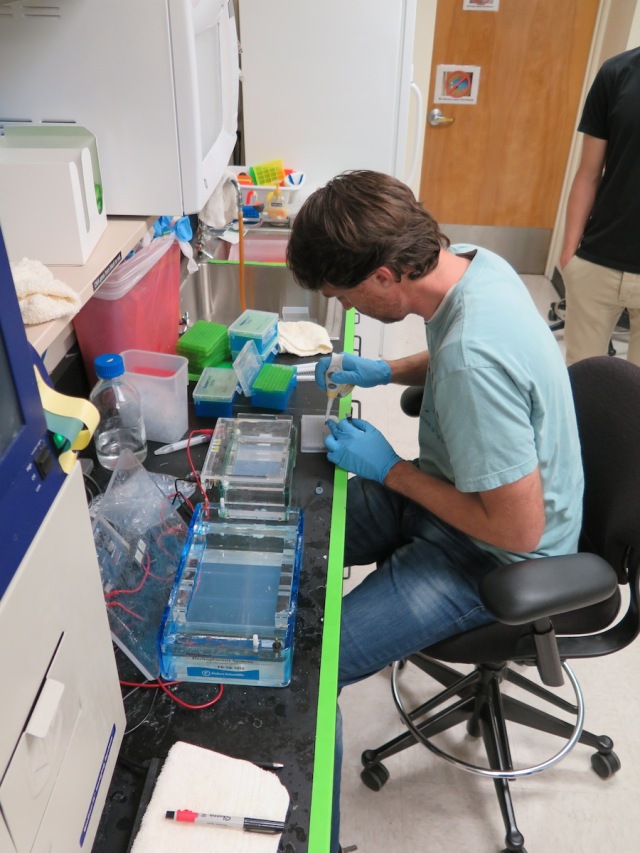 Below is a part of the gel showing the 28S PCR products from the amplification done by Tom and Shannon (on the left) and Mamo and Julia (on the right):

The first eight bands are all good, and indicate that we successfully amplified the 28S gene for those beetles.  The ninth spot is dark as that is the negative control – we did everything for that PCR as we did for other PCRs, but no DNA was purposely added.  If there had been a band there, it would suggest some DNA accidentally got into the chemicals, which would be bad.  The next eight spots are the same, but for a different set of beetles, and the last spot is another negative control for that second reaction.

Here’s John explaining that the 28S reactions were quite successful!

We also did PCRs for the COI gene during the same sessions.  Two genes (28S and COI) for 36 beetles combined mean that the students will have produced a total of 72 DNA sequences.  The next step is getting the PCR products ready to be sequenced, which I will report on in a future blog post…