Welcome to The Subulate Palpomere, a web site by David R. Maddison containing a blog about beetles, beetle diversity and evolution, and the Tree of Life.  It also has some pages about David, and things he does, and other things. You might also want to check out the website about David Maddison’s lab at Oregon State University.

The blog includes posts about my efforts and my lab’s efforts to discover and document biodiversity, including new species of beetles from around the world.  On occasion it also covers other things that relate to this: cool beetles, how-to guides to studying beetles, programming and software for studying evolutionary trees, scientific illustration, field work, and the life of an academic.

As to why it is called The Subulate Palpomere:  there is a particularly cool group of beetles, the genus Bembidion and its relatives, that have subulate palpomeres, and I have loved these beetles for almost 40 years.  Beetles have appendages around their mouth called “palps” that are like little feelers – the beetles use palps to handle their food, and to taste their food.  A palp is made of several pieces, and each piece is called a “palpomere”.  Bembidion and its relatives are unusual in that the palpomere at the end of the palps (the last palpomere) is thin and tapered – and the word used in entomology to describe such a thin and tapered palpomere is “subulate” (see picture, below). 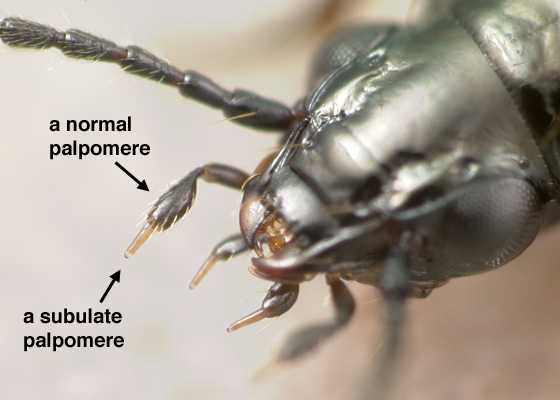