Posted on 30 September 2013 by David Maddison

The rains have returned to the Pacific Northwest.  During the last few days a rain-drop symphony has been playing in my house in the woods, and the douglas fir and oaks are weeping in thanks for fall’s arrival after a dry summer. 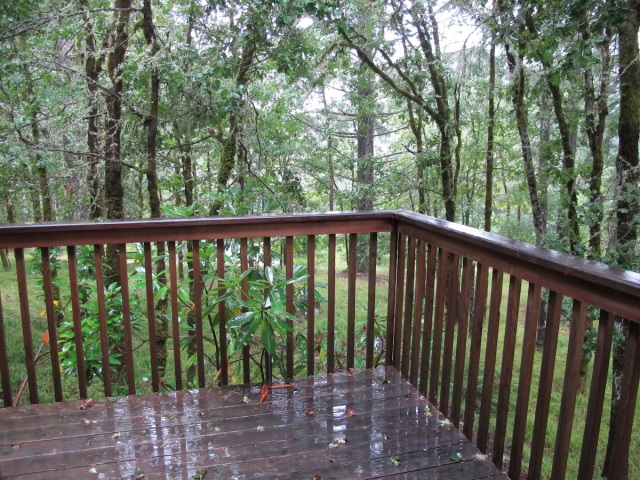 The rains will lead to the appearance of one of the PNW’s most famous insect inhabitants,  the rain beetle, Pleocoma.  But Pleocoma isn’t the only insect in this area that appears along with the rains.

When I arrived in Oregon in the fall of 2009, one of my quests was to find Lionepha chintimini.  This was a species described in 1981 from a single female, caught on top of Marys Peak, the highest mountain in the Coast Range of Oregon,  by Milt Campbell and Ales Smetana. That there was an endemic bembidiine about 30 minutes away from Corvallis was extremely pleasing, and I wanted to see it in the wild, and collect some for DNA work.  That it was only known from a single individual made it all the more mysterious and intriguing.

I went to the top of Marys Peak three days after I arrived in September, and found several small Lionepha, all of which I took to be Lionepha casta, the common species in this area.  The following year, in late May, once the rains had gone, I went up nearby Prairie Peak with Jim LaBonte and found what I took to be Lionepha erasa.  I did more collecting throughout the summer, when the top of Marys Peak was nice and sunny, but kept finding what seemed to be L. casta.

Some DNA sequencing that summer showed that I had been partly wrong – while most specimens I caught from Marys Peak in September 2009 were L. casta, one female was not, as its DNA sequences were quite distinct.  The specimens from the top of Prairie Peak from May 2010 were the same species.  I borrowed the type of L. chintimini from Ottawa, and it was evident that L. chintimini had been rediscovered!

More sleuthing revealed that there were already quite a few specimens of L. chintimini in some insect collections.  The Oregon State Arthropod Collection (OSAC) had several, including some collected decades ago by Jack Lattin, and the California Academy of Sciences had some old material as well.  Jim LaBonte has many in his collection.  Dave Kavanaugh, Jim, and I had looked at these specimens and thought they were L. casta.  These beetles are just so darn similar to L. casta that unless one has an excellent microscope that allows one to see microsculpture clearly, or one looks at male genitalia, one might presume as we all did that specimens are the common L. casta.  [Part of the problem was that the original description of L. chintimini is in error: the microsculpture is described in Erwin & Kavanaugh (1981) as being slightly transverse, and thus somewhat similar to that of L. casta, when in fact the sculpticells are almost perfectly isodiametric, like L. erasa.]  Now that I know how to tell them apart, I can easily distinguish L. chintimini from L. casta just on the basis of microsculpture.  But that ability required a Leica M165 dissecting scope with a ring light, as well as time for my knowledge to mature.

I have noticed that specimens I collected in June, July, and August are all Lionepha casta, and specimens found in forested areas in the fall and spring are also all L. casta.  I’ve done a lot more looking for L. chintimini since 2009, and the pattern is clear:  these beetles live in high-elevation grasslands, not in forests, and are only active above-ground after the rains start in the fall.   Jim LaBonte has found a large series in the heart of the winter, in December and January, in the cold rain on top of Marys Peak. They are active through the winter, and become hard to find as the soil dries out in May, after the rains stop, and by June they are hidden.

It’s not surprising they would be inactive in summer.  In early May, the top of Mt Hebo looks like this: 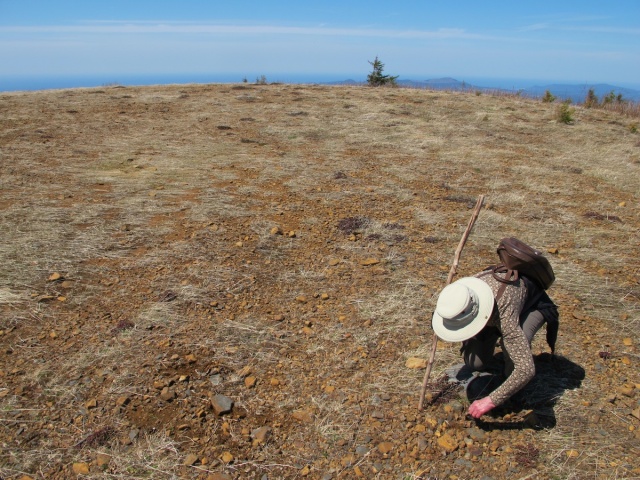 The soil is damp, and L. chintimini are abundant on the soil surface and under rocks.  But  this habitat becomes extremely dry by mid June, and doesn’t often see rain until the fall.  The beetles are probably underground, aestivating through the summer drought.

I suspect the same pattern applies to Lionepha lummi, a close relative of L. chintimini.  L. lummi lives in in Washington and British Columbia, apparently in grasslands, including coastal grasslands.   I have a suspicion that L. lummi and L. chintimini might actually be the same species, with the southern populations being at higher elevation.  I’ll be heading to the type locality of L. lummi (San Juan Island, in Washington) in a couple of weeks, and hope to find some for DNA sequencing.  I’ll report how it goes!

I wonder how many other species are winter-active in this part of the world, and whether any of them have yet to be discovered.

This entry was posted in Fieldwork, Revising Bembidiina and tagged genitalia, Lionepha, microsculpture. Bookmark the permalink.