What should I name this beetle?

Along some creek and pond shores in the Sierra Nevada of California there lives a pretty, spotted Bembidion, and this Bembidion has no name.  It belongs to the subgenus Liocosmius, a group of Bembidion that range from BC to Baja California, east to New Mexico.  There are three described species in the subgenus (B. mundum, B. horni, and B. festivum), and three undescribed (one species in western California, one in Arizona and New Mexico, and the one in the Sierra Nevadas).  I have names figured out for two of the undescribed species, but the third one (the one that lives in the Sierra Nevada) eludes me.  Here’s what a male of that one looks like.  The spots look brighter when it is alive. 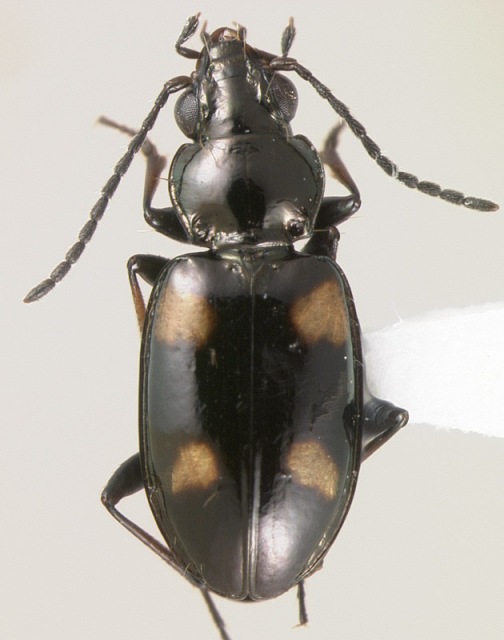 This species is restricted to the Sierra Nevada of California, and it is unusual within the subgenus in its restriction to mountainous areas.   Below is a picture of one of its habitats in the Sierras.  At this site it was found along with Bembidion iridescens, B. wickhami, Lionepha pseudoerasa, L. osculans, L. sequoiae, L. erasa, and other species of Bembidiina.

What should I call this species?  I’ve thought about several possibilities.

In looking for names of species, my first stop is usually Roland Brown’s lovely book “Composition of Scientific Words”, which you can download here.  While that has given me some ideas, nothing has gelled yet, and I would be delighted to have suggestions.

There are many Greek or Latin words that could be used to mean “mountain” (e.g., “mons”, “alpinus”, “oros”); the Spanish  “sierra” could also be used.  “Spotted” could be included in the name through “guttula”, or “macula”, or “ocellatus”.  Even better would be if it makes one thinks of twinkling stars; the Greek “astralos”, meaning spotted with stars, or the Latin “stellatus”, meaning “starred”, would work nicely.  Combining a word meaning mountain and another meaning spots or stars would be even better, to give the sense of these beetles as the little stars that live in the mountains; ideally such a combination would be grammatically well-formed, too.

9 Responses to What should I name this beetle?