Changing of the guard

In 1985, my brother Wayne wrote the first version of MacClade, a graphical program for studying branches of a phylogeny (“clades”) and phylogenies more generally.  It was a very small program, that did just a few things, but was notable in introducing graphic manipulations of phylogenies on the screen.  I started working on the MacClade code a few months later, when I acquired my first Macintosh Plus computer.

By about 1989 I had more or less taken over MacClade development; version 3.0 came out in 1992, and the last release was version 4.08 in 2005.   MacClade celebrated its 25 anniversary in 2010, and was still being widely used and cited.  However, in July of 2011, Apple released a new operating system, and removed from it compatibility with older code such as that contained in MacClade, and MacClade could no longer function.

In 1997, while I was working on version 4 of MacClade, Wayne started a rewrite of the whole program, and Mesquite was born.  We have been developing Mesquite ever since.  Mesquite is modular, and very flexible, and it now does much more than MacClade ever did.  That comes with a downside, however – Mesquite’s interface is much more complex than MacClade’s, and so it has taken people a bit longer to get used to it.

Wayne and I abandoned MacClade for our own empirical work quite a few years ago, but the community has continued to use it.  Even though MacClade’s development stopped in 2005, as late as 2008 there were twice as many citations that year for MacClade as for Mesquite.

Yesterday, as I was looking up some statistics for a report, I realized that the changing of the guard had been completed: for the first time, Mesquite’s citations for a year topped MacClade’s.  In fact, in 2012 Mesquite was cited more times than MacClade had ever been cited: 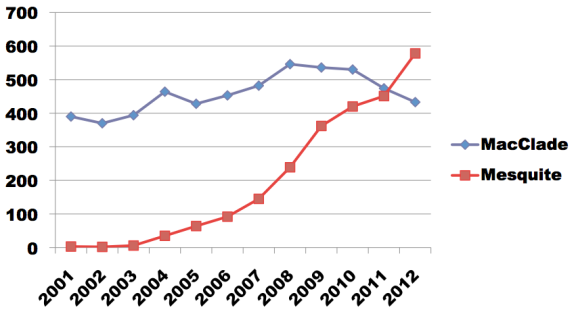 Number of citations each year

This is both good, and a bit sad… sometimes I miss MacClade.

This entry was posted in Software Development, Tree of Life and tagged citations, phylogenetics, software. Bookmark the permalink.