Discovering Insect Species: state of the art in Trepanedoris

As mentioned in my previous post, I outlined the state of the art in Trepanedoris research to the students in my Discovering Insect Species course.   Here’s the story I told them.  (As the class will be focusing on Trepanedoris in North America, my overview will only cover the New World species.)

I’ve already documented the published history of taxonomic research on Trepanedoris. In summary, according to the most recent revision of the group in North America plus minor notes since then, there are 13 species of subgenus Trepanedoris in Canada and the USA, arranged into two species groups:

In contrast, in the connivens group, the frontal furrows diverge at an increasingly greater angle toward the back, in some wrapping around the back of the eye, or at least getting closer to the eye as they go back:

There are also differences in male genitalia between the groups.  The most obvious is the shape of the apex, which has a notable hook in the fortestriatum group:

but not in the connivens group:

I began exploring Trepanedoris about a decade ago, but stopped that research in 2012 in anticipation of this course.  Before I stopped, my lab had extracted DNA from 43 specimens of Trepanedoris and sequenced several genes in each.   These genes include nuclear ribosomal gene 28S ribosomal RNA (“28S”), the mitochondrial gene cytochrome oxidase I (“COI”), and two nuclear protein-coding genes: the carbamoyl phosphate synthetase domain of the rudimentary gene (“CAD”), and topoisomerase I (“Topo”).

Here are most of those 43 vouchers, in all of their littleness and glory:

Below are the maximum likelihood trees from preliminary sequence data for each of the four genes.  The names used in the tree include my tentative name for the species to which each specimen belongs, plus a code for the state or province, plus the voucher number.  I’ve colored some of the specimens according to their taxonomic placement in my tentative scheme, but some specimens I left uncolored.  The classification use here is extremely fluid, and is only based upon these gene trees and just a little bit of morphological and geographic data.  As one example among many of things left unexamined are the male genitalia; photos have been taken, but I have not compared them, as I wanted to save that step for the class. 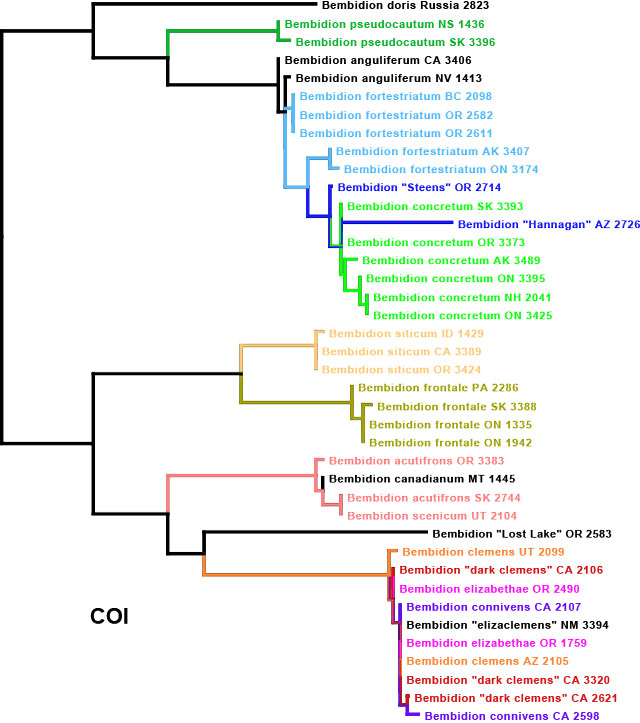 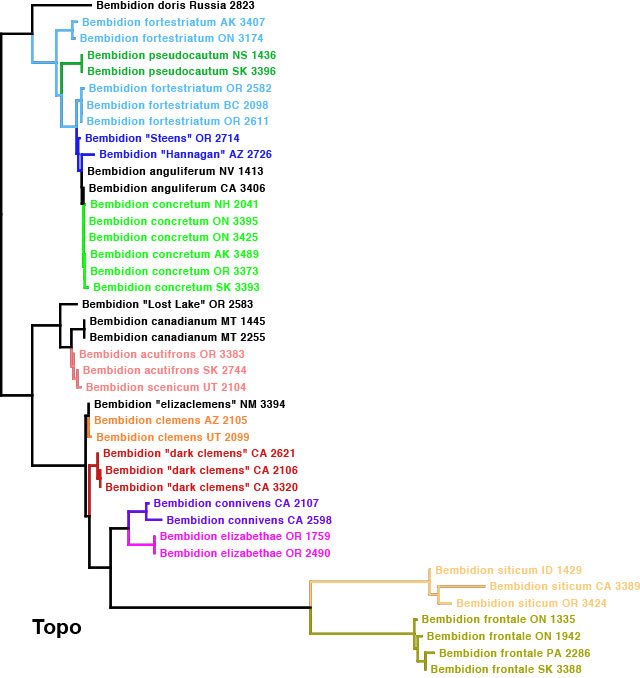 Based upon these gene trees an a little bit of morphological data, the starting point for the course is, tentatively, the following 17 North American species of Trepanedoris, with preliminary names:

But there are obvious uncertainties with this view.  I will write more about various issues later, but I wanted to point out two particular issues:

Bembidion acutifrons:  there are two rather different forms of this species.  In Colorado and Saskatchewan males are very shiny, with almost no microsculpture, and are very dark, with dark brown legs, and have a very broad prothorax.  In contrast, males from western Oregon (e.g., Corvallis) and western Washington have dull elytra because of extensive microsculpture, and are much paler, with reddish legs and generally paler body; they also have a narrower prothorax.   If these are two different species, the dull, western one would probably have the name Bembidion microreticulatum Hatch.  Genitalia have not yet been examined, and more specimens need to be sequenced from other localities.  Most critical will be to acquire DNA-quality specimens of the dull, western form from localities distant from Corvallis, e.g., Washington state.

Bembidion fortestriatum:  If you look at the gene trees above, you will see that in each gene, the specimens of B. fortestriatum from Alaska and Ontario form a clade distinct from the Oregon and British Columbia specimens.  I suspect these will be different species, but I haven’t looked at morphological characters yet, and more extensive sampling is needed.

This, then, is the starting point for the class.  I am most excited to see what we discover during the next two months!