A Very Good Day of Collecting

Posted on 8 February 2013 by David Maddison

We arrived at the campsite near the shores of Lago Puelo (above) in the mountains of Argentina late at night.  It had been a long day of collecting, and we were all rather tired.  There was a roaring river nearby (a river that emptied into Lago Puelo), but the best I could make out in the circle illuminated by my headlamp was fast water and dangerous shorelines.  The river shores didn’t look too good (too narrow and too steep), and so I did not have much hope for this locality.  Little did I know what would await me in the morning.

But first, we needed to set up camp, cook supper, and open a bottle of local red wine.  As normal, at supper we talked about what we collected during the day, and what we might get tomorrow.  Each night we did this, and each night we said that tomorrow was the day we would catch Chaltenia.

This was in February 2007, along the Rio Azul near its mouth into Lago Puelo.  My companions were Sergio Roig-Juñent and three graduate students. Most of my targets on this trip were species of Bembidion, and so far the trip was very successful.  But there was one in particular that I really wanted to get in large series, the highest priority species left:  Bembidion (Chilioperyphus) orregoi.

And Chaltenia was on the back of our minds all the time, as it was such an enigmatic and rare carabid: Sergio had described it six years earlier, based upon four museum specimens from two very different localities.  He considered it to be a Zolini, but described a new subtribe for it.  It looks very different from other zolines, and is by far the biggest member of the supertribe Trechitae in the world.  I very much wanted to get specimens for DNA for a project I was doing, but as Sergio had been looking for it to no avail, and as there was no hint about habitat, we didn’t think we would find it.  Throughout our trip we looked in zoline habitats (in mossy logs, in forests), and every night we said “tomorrow we will find Chaltenia!”.

The next morning, I got up a couple of hours before everyone else, and tromped out the river.  To my surprise I was not greeted with a dangerously steep and narrow river shore, but by a gorgeous braided river with spectacular rocky and sandy shores, with large gravel islands on which scattered willow trees lived.

I made my way to the first island, and found a small bank of pure sand, filled my bucket up with water, and splashed the water onto the bank.   Within about 30 seconds up popped a Bembidion orregoi, and another, and another…  About 45 minutes later I had over 70 specimens, and I was completely delighted. But wait, it gets better… 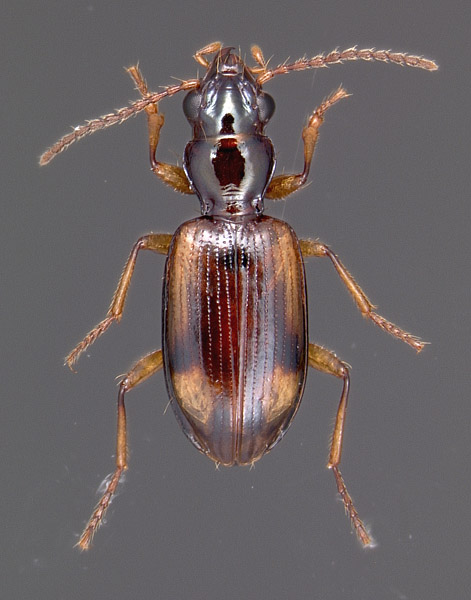 I crossed over to another island, and found on the gravel shore myriad good species, including a large undescribed Bembidion, as well as two species of the enigmatic genus Bembidarenas.  Just before I headed back to the camp to see if the others were up, I decided to look into a depression at the base of a willow.  There, in the shade, damp sand was covered with rocks.  The first water splash on it caused a large, flat, black carabid to emerge from under a rock.  I picked it up, and thought it looked rather curious – rather like the patrobine genus Diplous.  But Diplous doesn’t live in the Southern Hemisphere.  I brought out my hand lens, and looked carefully – the beetle had a seta in the scrobe of the mandible!  Wow!  I realize it indicates how much of a beetle geek I am to note that I got VERY excited to see a scrobal seta.  I was really, really excited, because I thought: (1) scrobal setae don’t occur (with a minor exception) in the huge carabid subfamily Harpalinae, so this must be a non-harpaline; (2) there are very few non-Harpalinae in South America except for things that look very distinctive in some way or another (e.g., scaritines), or that are very small (e.g., tachyines), and this was a big, normal looking carabid; (3) the only thing I could think of that could look anything like this was Chaltenia.  I splashed a few more times, got a dozen of them, and then ran across the islands and through the river channels, back to camp.  I showed the specimens to Sergio, and we convinced ourselves, eventually, after several rounds of disbelief, that this was indeed the elusive Chaltenia. Sergio and I went back out to the river, and collected more than 50 of them.

This entry was posted in Collecting Site of the Day. Bookmark the permalink.

2 Responses to A Very Good Day of Collecting